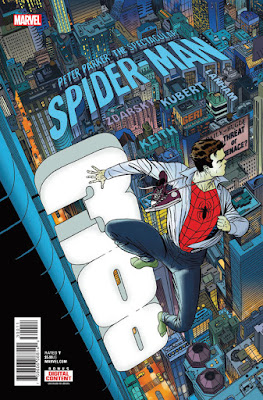 PETER PARKER: THE SPECTACULAR SPIDER-MAN #300
CHIP ZDARSKY (W) • ADAM KUBERT (A)
Cover by MARCOS MARTIN
Variant Cover by ADAM KUBERT
Variant Cover by ALEX ROSS
Variant Cover by SKOTTIE YOUNG
Remastered VARIANT COVER BY FRANK MILLER
Remastered Sketch Variant Cover by FRANK MILLER
Hulk VARIANT COVER BY David Nakayama
Blank Variant Cover also available
MOST WANTED Part 4
An oversized anniversary epic, told the only way your pre-eminent pals in the Spidey-Office know how — in the Mighty Marvel Manner! For weeks, the Tinkerer has been launching a campaign against his do-gooder brother, the Mason, and Spidey’s nearly met his maker more than once trying to stop their sibling rivalry! With a little help from a tech-heavy team of Marvel heroes, Spider-Man takes the fight directly to Tinkerer! But Tinkerer’s got tech of his own…and it’s out of this world!
56 PGS./Rated T …$5.99
Posted By nwcomicgames at 8:42 AM