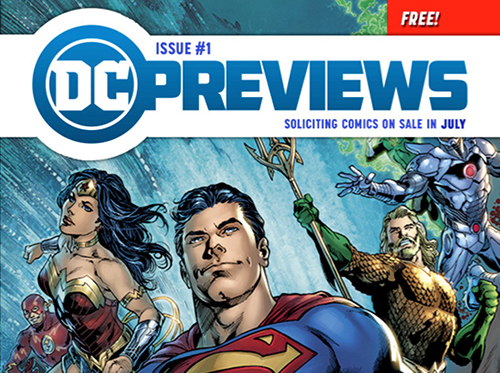 Beginning with the Previews to be released in May 2018, DC Comics' usual listing in Previews will migrate over to its own seperate catalog - free of charge, and akin to the long-running one Marvel Comics solo catalog. Last year, Image Comics' entered a deal in which its Image+ magazine would also be included with the purchase of Previews.

“For Previews readers, that means you’ll receive a copy of Previews, DC Previews, Marvel Previews, and the Image+ magazine - all for the price of $3.99," said Diamond's Previews editor Marty Grosser.

In addition to the DC rollout, Diamond will also begin offering Previews digitally in May 2018 as part of a "special Previewsworld app." Previews will be available as a standalone digital purchase, but also available free to those that purchase the print addition. The price point for the digital copy has not been announced.

The first changes to Previews will begin in the April-releasing issue however. The changes include:

The merging of the prose novels, magazine, and comics/GN section to one, larger "Comics, Graphic Novels & Print" category.
Seperating the manga into its own section.
The toys and merchandise categories will be flipped in order to be read from the back cover forward a la a flipbook.
Posted By nwcomicgames at 8:24 AM