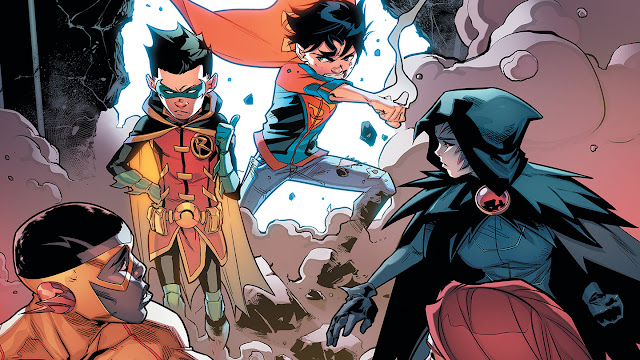 In comic book news.... it was reported after word came down that Super Sons had been cancelled yesterday, writer Peter J. Tomasi thanked fans for a flood of well-wishes, and promised that he was not yet done writing Superboy and Robin, in spite of the title's end.

Over the course of three separate entries on Twitter, Tomasi gave fans hope for the near future and explained that the cancellation had nothing to do with low sales.

"Wow! The love and sadness for Super Sons being cancelled is knocking me out!" Tomasi tweeted. "So, before too much time passes let me be the first to tell you that I’m not done with our two favorite boys and new news will be forthcoming soon!...Brothers and sisters, keep thinking good things! It is not being cancelled for bad sales. There are plans afoot I can't share at this early juncture but you will be happy with the results - Super Sons lives! But hey now! Remember, keep your love for the last few issues of Super Sons going, lots of fun to be had with some emotional tugs waiting around the corner, and it shows that you continue to support the book/characters as we prep the new stuff coming yer way!"

The series, which features the sons of Batman and Superman teaming up for adventures, is written by current Superman scribe Tomasi, who will leave the Man of Steel behind in May to make way for Brian Michael Bendis, who will also take over Superman's adventures in Action Comics.

The series has a decidedly more light-hearted tone than many of DC's main-line superhero books, making it a favorite among its readership. It seems likely its cancellation is more a matter of clearing a path for Bendis's take on the Superman mythos.

While Bendis has said his run will not ignore the acclaimed Tomasi and Dan Jurgens (Action Comics) runs that preceded it, the cancellations of Super Sons and Supergirl paint a picture of a lean, mean Superman office with only two voices -- Bendis and Gene Luen Yang, whose New Super-Man and the Justice League of China continues -- being heard.

Super Sons was one of the titles recently announced as part of DC Zoom line of graphic novels for younger readers. From Kingdom Keepers writer Ridley Pearson, Super Sons is expected to hit stores in April...of 2019.

Speculation about the future of Super Sons began when it was revealed that Bendis's Man of Steel would be another origin reboot, with some fans fearing that Superman's marriage and/or son would be wiped from continuity. Even after Bendis shot down those ideas, some fans remained skeptical.
Posted By nwcomicgames at 7:17 AM