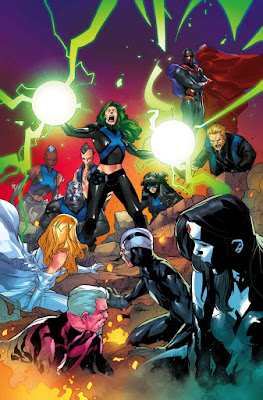 X-MEN BLUE #27
CULLEN BUNN (W) • Marcus To (A)
COVER BY R.B. SILVA
• With the Original Five X-Men lost in space, a new team of mutants has emerged to face the White Queen, Havok, Miss Sinister and Bastion!
• But while the new X-Men are away, the Marauders will play, striking viciously at Magneto.
• Magneto is forced to make a terrible decision, leading him ever closer to the darkness he has tried to put behind him.
32 PGS./Rated T+ …$3.99

X-MEN BLUE #28
CULLEN BUNN (W) • Marcus To (A)
COVER BY R.B. SILVA
• The conclusion of the Mothervine story! The ultimate fate of the White Queen and Havok revealed!
• Magneto reveals a secret plan – and secret allies – to counter the chaos caused by Mothervine!
• But some of the new X-Men will not make it out of this adventure alive!
32 PGS./Rated T+ …$3.99
Posted By nwcomicgames at 9:29 AM