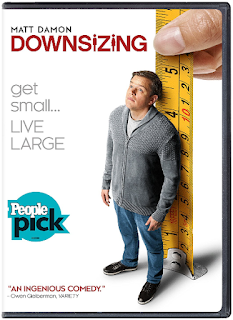 DOWNSIZING (2017)
Language: English
Genre: Comedy/Drama
MPAA rating: R
Director: Alexander Payne
Actors: Kristen Wiig, Matt Damon, Christoph Waltz
Plot: With overpopulation threatening mankind, scientists have discovered a way to shrink people to just 5 inches, in order to save resources and space. Paul and his wife, Audrey, see this as an opportunity to escape their stressed-out lives in order to shrink themselves and live in mini-luxury at a government-run downsizing community - but this new, small life comes with its own set of adventures. 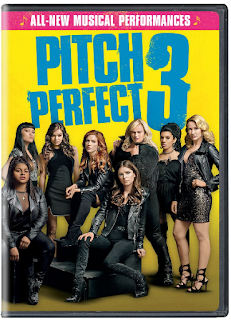 PITCH PERFECT 3 (2017)
Language: English
Genre: Comedy
MPAA rating: PG-13
Director: Trish Sie
Actors: Anna Kendrick, Rebel Wilson, Brittany Snow
Plot: Fresh off their high of winning the World Championships, the Bella Bartons find reality crashing down when they go their separate ways and realize job prospects are dim for acapella singers. Luckily, they are granted one, final chance to showcase their talents - a USO tour, but it also brings about their biggest challenge when they face an all-new girls group - one that plays their own instruments and sings their own songs.
Posted By nwcomicgames at 8:20 AM