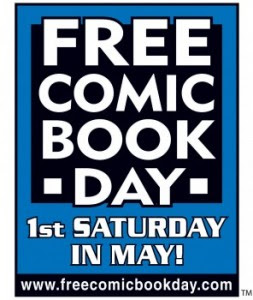 What is Free Comic Day?

In some communities, the day is more grandly organized such as in London, Ontario, Canada where most of its major comic book retailers, such as Heroes Comics, as well as the London Public Library's Central branch participate. On that day, these establishments cooperate in a major cross-promotion in which visitors are invited to collect stamps of each participating establishment for entry in a prize draw upon completion as well as various other activities. The 2013 event collected over 2000 such completed ballots, which does not account for more casual visitors.

Some stores have treated FCBD as mini-conventions complete with artist alleys, contests and cosplaying fans. FCBD also has a positive impact for independent artists as it became an opportunity in marketing their works.

Mark your calendars as Free Comic Book Day is Saturday, May 5th, 2018.
For more information www.freecomicbookday.com website.
Posted By nwcomicgames at 7:21 AM