DC's Hawkman will receive a new ongoing series from writer Robert Venditti and artist Bryan Hitch, according to The Washington Post. Spinning out of Dark Nights: Metal (which retconned Hawkman's origins and place in the DC Universe), Hawkman #1 will launch in June.

“[Metal] has really elevated Carter Hall/Hawkman (Katar Hol), and brought him back to the DC universe in an [exciting] way,” Venditti told The Washington Post. “That’s really what Bryan and I’s vision for the series is as well.”

“Hawkman is a foundational character in the DCU," Venditti continued. "Over time I think he’s lost 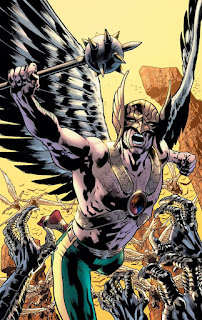 some of that central importance to the DC universe, and we really want to bring that back and make him a marquee character. And to do that we’re going to take him to a lot of unexpected, unexplored places and introduce a lot of new mythology for the character.”

“The Winged Man is such a significant and powerful image in myth and legend. That’s exactly the element Hawkman fits best. It’s such a unique image to play with from the Bird of Prey to the Angel, the winged man is genuinely awesome in the truest sense,” added Hitch. “Carter [Hawkman] is the DCU’s greatest warrior, but he’s also part of its secret history. All of that gives you such a rich visual tapestry as an artist to play with.”

“As much as he knows and as much as his experience with his many lives has brought him, he’s about to find out that he knows a very small piece of the story,” Venditti concluded. “There’s a mission he has to fulfill and if he doesn’t, it’s going to have implications not just for Earth, but for the wider DC universe.”

According to Venditti, Hawkgirl will also play a role in the series - though not as Hawkman's lover at first. “She’s as foundational to the concept really in a lot of ways that Hawkman is,” Venditti said. “Now how we’re going to do that is hopefully going to be set up in a way that will surprise some people. Even when she’s not there on the page, she’s still there in terms of what we’re building and how we’re working towards it.”

Writer Jeff Lemire previously teased a new Hawkman series at Comic-Con International: San Diego 2017, to follow the Hawkman: Found one-shot he created with Hitch. Hawkman #1 is due out on shelves in June.
Posted By nwcomicgames at 6:21 PM