Comic Book Preview - INJUSTICE VS. HE-MAN AND THE MASTERS OF THE UNIVERSE #1 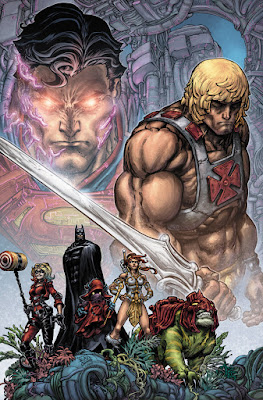 INJUSTICE VS. HE-MAN AND THE MASTERS OF THE UNIVERSE #1
written by TIM SEELEY
art and cover by FREDDIE E. WILLIAMS II
variant cover by TIM SEELEY
Believing He-man and the Masters of the Universe defeated, a robotic impostor has seized control of Eternia-but not for long! After freeing his kingdom from this strongman's rule, Prince Adam learns not everyone is pleased to see the pretender deposed-but Adam knows the value of freedom. So when heroes from another dimension ask his aid in deposing a super-hero turned dictator, he agrees. Teaming up with Batman against the Superman of the Injustice Universe, He-man and his new allies face dangerous and familiar enemies in a battle where no world is safe!
ON SALE 07.18.18
$3.99 US | 32 PAGES
FC | 1 of 6 | RATED T
Posted By nwcomicgames at 8:45 AM