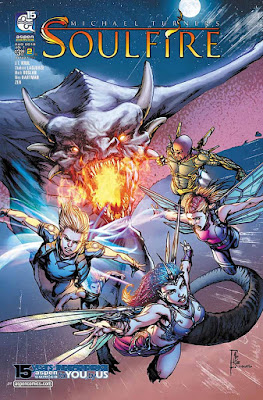 SOULFIRE vol 7 #2
J.T. Krul – Story / Chahine Ladjouze – Art / Wes Hartman - Colors
Celebrating the 15th anniversary of its creation, Michael Turner's incredible vision of magic and wonder returns for an all-new volume!
In the hidden magical realm of the Everlands, Faye struggles in her duty to serve as queen beside the strong-willed King Sarin, who only seems to value power. Meanwhile, Malikai and Grace learn of the attack on Ren. What could it mean? And, how great is the threat?
Michael Turner and Aspen Comics’ flagship title commemorates its landmark fifteenth year and the creative team of long time Soulfire writer J.T. Krul (Teen Titans, Jirni), newcomer Chahine Ladjouze, and colorist Wes Hartman have joined forces to bring new readers as well as loyal fans alike a Soulfire story for the next generation!
SOULFIRE vol 7 #2 is in stores August 22nd, 2018!
FC / 32 pages / $3.99
Posted By nwcomicgames at 7:07 AM