As expected, DC Comics' all-star Action Comics #1000 anthology, priced at $7.99 and previously reported to have sold in excess of 500,000 copies, provided the comic book Direct Market a big boost in April 2018 - though Marvel Comics still managed to top the market share categories, according to figures released by Diamond Comic Distributors Friday morning.

Perhaps key to Marvel holding onto the market share titles were six titles in April's Top 10 compared to DC's three, including Dan Slott and Stuart Immonen's Amazing Spider-Man #798 at #2 and #799 at #3, Charles Soule and David Marquez's Hunt for Wolverine #1 at #4, Cullen Bunn and Iban Coello's Venomized #1 at #6, Gail Simone and David Baldeon's Domino #1 at #8, and Mark Waid 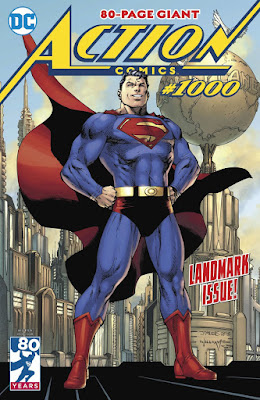 Due to Marvel's solid month and the boost of Action #1000, comic book sales were up 15.67% in dollars and 4.11% in units versus April 2017 (both four-week months), reflecting the high price point of the DC milestone issue. With graphic novel sales relatively flat against last year, the Direct Market was up 11.08% in total dollars sales and 3.64% in total unit sales year to year, one of the few positive months in last year and 1/2. John Jackson Miller of Comichron for his big takeaways from the month:

"Last April's sales winners were 'Thehe 'Button' issues and the launch of Secret Empire; this April, the mix appears to have offered a better sales story. April's improvement further appears to be spread around some: Comichron finds Marvel's and DC's dollar sales for the month at full retail up 19% and 18% respectively year-over-year, while Oni Press, IDW Publishing, and Dynamite Entertainment's April-versus-April beats were even larger."

"The graphic novel category was up slightly last month in dollar terms after a series of disappointing results: around 610,000 units shipped. You have to go back to August 2016, during the DC 'Rebirth' launch, to find a month where both comics and graphic novel dollar sales were up. April did the trick, if just barely."
Posted By nwcomicgames at 7:24 AM