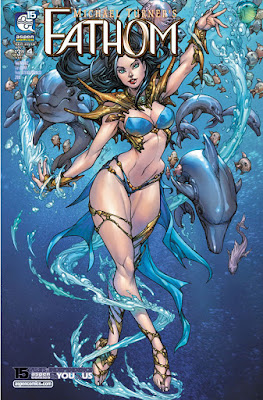 FATHOM vol 7 #4
Ron Marz – Story / Siya Oum – Art / Peter Steigerwald - Colors
1998’s Best-Selling Title of the Year Celebrates 20 Years in 2018!
It’s Aspen Matthews versus her former mentor and dissident Killian in the showdown that’s been years in the making! And no member of The Blue may survive!
Michael Turner and Aspen Comics’ flagship title commemorates its landmark twenty years since its debut in grand fashion! The superstar creative team of Ron Marz (Green Lantern, Witchblade) and Siya Oum (Lola XOXO) are on board to deliver Fathom, and the iconic heroine, Aspen Matthews, to a new generation of readers as well as loyal fans alike!
FATHOM vol 7 #4 is in stores September 12th, 2018!
FC / 32 pages / $3.99
Posted By nwcomicgames at 9:16 AM