Both Teen Titans #20 and Titans #23 have adjusted their schedule, according to DC Comics’ latest retailer newsletter. Adam Glass and Bernard Chang’s Teen Titans #20 has been pushed back three weeks, going from July 4 to July 25. Dan Abnett and Brandon Peterson’s Titans #23 is coming one week early -out July 11, instead of July 18.

Here are the updated solicitations: 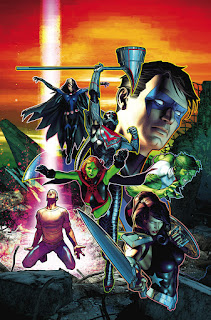 TEEN TITANS #20
written by ADAM GLASS
art and cover by BERNARD CHANG
variant cover by BABS TARR
Batman has no idea what he's doing. Superman? Not a clue. Wonder Woman? Whatever. Damian Wayne is Robin, and he's done with the bleeding-heart approach favored by the heroes of the senior circuit. New plan of action: recruit a new Teen Titans. Kid Flash, Red Arrow and newbies Roundhouse, D'jinn and…wait, Lobo has a daughter? That'll end well. And then build something in secret deep beneath the new Teen Titans HQ. Secret from his teammates, secret from even Batman. It's a secret that will change the way you look at Robin forever!
ON SALE 07.25.18
$3.99 US | 32 PAGES
FC | RATED T

TITANS #23
written by DAN ABNETT
art by BRANDON PETERSON
Cover by RYAN SOOK
variant cover by STJEPAN SEJIC
Can anything stop the Metagene pandemic unleashed through the events of JUSTICE LEAGUE: NO JUSTICE? The all-new Titans are on the case. Roll call: Nightwing, Donna Troy, Raven, Steel, Beast Boy and Miss Martian! But can even their combined might stand against new super-powered weapons of mass destruction birthed by the Metagenes? And (SPOILERS) how will the events of TEEN TITANS #20 come back to haunt the Titans? New enemies are out for blood in part one of "The Spark."
ON SALE 07.11.18
$3.99 US | 32 PAGES
FC | RATED T
Posted By nwcomicgames at 7:15 AM