Black Panther #3 will be released four weeks later than originally planned, according to Marvel. The publisher has informed retailers that Ta-Nehisi Coates and Daniel Acuna's third Black Panther issue is no longer scheduled for July 25, but is now expected to be released August 22. No reason was given for the delay.

This new Black Panther volume debuted May 23, with the #2 on-schedule for a June 27 release. 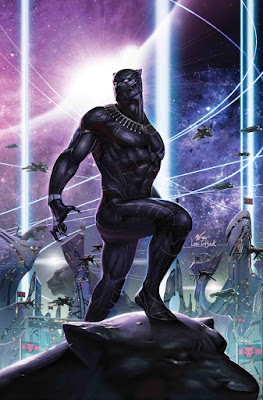 BLACK PANTHER #3
TA-NEHISI COATES (W) • DANIEL ACUñA (A)
Cover by IN-HYUK LEE
Variant Cover by JAMAL CAMPBELL
Carol Danvers 50th Variant Cover by PAUL RENAUD
THE INTERGALACTIC EMPIRE OF WAKANDA CONTINUES!
The rebels make their move! On the verge of liberating the Nameless, T’Challa, M’Baku and Nakia hunt for mysterious artifact that promises to turn the tide. What is the M’Kraan Shard? And will T’Challa find its acquisition worth the cost?
32 PGS./Rated T …$3.99
Posted By nwcomicgames at 7:24 AM