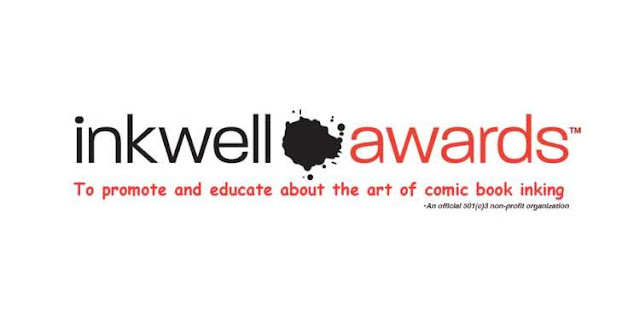 The Inkwell Awards released the list of winners of its 11th annual awards for excellence in the art form of comic-book inking. Nominees were again chosen by a separate and independent nomination committee. This year featured the greatest number of nominees, including female inkers in three of the five categories. Voting by professionals and fans took place in April via live ballot at the non-profit advocacy’s website. One winner was chosen in each of five categories based on American interior comic-book work cover-dated 2017.

Separately, the Inkwells selected internally the two recipients of the annual Joe Sinnott Hall of Fame Award and one recipient for the Stacey Aragon Special Recognition Award (SASRA). Winners were contacted and many of the invited guests were present to receive their trophies during North Carolina's HeroesCon, the host show for the Inkwells. Winners are listed with their nominated credits and the percentage of votes received, where applicable.

“I was thrilled to hear that two very fine inkers were selected for induction into the Inkwell Awards Hall of Fame for 2018,” said Joe Sinnott, the award’s namesake and first recipient. “Both Joe and Bob have previous ties to the Inkwells, Bob being the keynote speaker at their awards ceremony at HeroesCon in 2012, and Joe being the Guest of Honor at the 2017 ceremony. It is with great pride that we honor these two excellent ink artists into the Inkwell Awards family as 2018 recipients of the Joe Sinnott Hall of Fame Award. Congratulations, fellas, on jobs, and careers, well done!”

The live awards ceremony began with a special appearance by guest of honor and industry legend Mike Royer, who discussed the art form of comic-book inking, his career in the medium, and its artists. Inkwell Awards founder and director Bob Almond acted as ceremony host. He was joined by hostess and spokesmodel “Ms. Inkwell,” as portrayed by both Hailey Skaza-Gagne and 2011 spokesmodel Kathy Denise Taylor. Artist and Inkwell Contributor Dan Panosian presented the five main awards. Artist and Inkwell Ambassador Pat Broderick presented the Hall of Fame and SASRA awards.

In celebration of the non-profit’s 10th anniversary, Almond created the Above & Beyond Award for those organization members who have performed exceptionally (or others in the community who have made special efforts to advance the art form of inking). These went to:

–Hailey Skaza-Gagne, the longest-running Ms. Inkwell spokesmodel, who has appeared at four straight Heroes conventions and attended 21 consecutive events, while expanding her duties to include public speaking and moderating panels.

–Robert Haines, the first person to serve on the nomination committee for 10 consecutive years since it began.

–Mark Sinnott, who has been a Senior Inkwell Contributor for a decade, acting as liaison between the Inkwells and his father, Joe. “Without Mark's generosity and diligence,” Almond said, “there would certainly not be nearly as many achievements nor funds raised for the organization–successes which allowed us to reach 10 years of operations and altruism.”

Posted By nwcomicgames at 9:40 AM