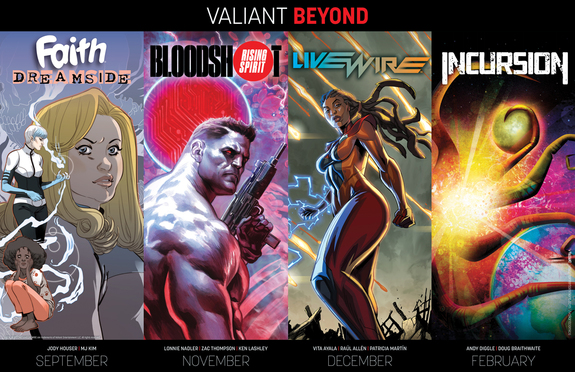 As first revealed at Comic Book Resources, Valiant is proud to announce “BEYOND” – a new wave of groundbreaking series that will carry the critically acclaimed publisher onward toward 2019! Born from the aftermath of HARBINGER WARS 2, the most ambitious crossover event ever attempted by Valiant, BEYOND will round out the end of 2018 and drive forward into the New Year with an invigorating slate of exciting new stories, both from returning talent and rising stars alike:

“I'm excited and thrilled to finally unveil what we have planned for the first wave of the future of Valiant with VALIANT BEYOND,” said Valiant Executive Editor Joe Illidge. “Each of our upcoming series is a shining example of what makes Valiant so unique among comic book publishers – our love for the incredible cast of complex, grounded characters; a pledge to continue creating a cohesive universe that every reader can follow; our passion for inviting and nurturing new voices within the industry; and an unwavering commitment to tell quality stories that will build upon the great Valiant narrative landscape. We're hard at work driving Valiant forward, and this is just the beginning!”
Posted By nwcomicgames at 4:37 PM