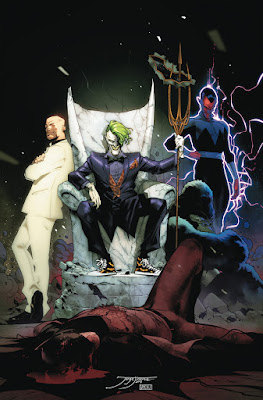 JUSTICE LEAGUE #12
written by JAMES TYNION IV
art by FRAZER IRVING
cover by JORGE JIMENEZ
variant cover by JAE LEE
“DROWNED EARTH” part three! It’s Batman, in a full-body cast, versus the Legion of Doom! Get a ringside seat for the craziest fight in comics as a bedridden Batman battles The Joker, Lex Luthor, Gorilla Grodd and Sinestro! Meanwhile, Aquaman locks tridents with Poseidon and Mera discovers an ancient secret that could change the fate of Atlantis—and the entire Earth—forever!
ON SALE 11.21.18
$3.99 US | 32 PAGES
FC | RATED T+
Posted By nwcomicgames at 8:46 AM