Very sad news as Artist Marie Severin has passed away Thursday evening, August 29, 2018, at the age of 89 following a series of strokes. Her passing was announced by Irene Vartanoff, who according to Severin's art agent Spencer Beck, was her close friend

"I'm very sorry to report that Marie Severin, the funniest and nicest woman in the comic book biz 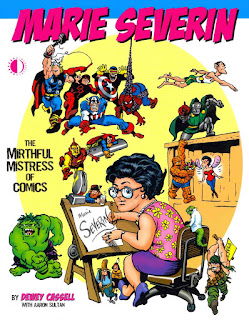 ever, is no more," said Vartanof.

Severin got her start in comic books when her brother, artist John Severin, hired her as a colorist for some of his work at EC Comics. Leaving her finance career on Wall Street, Severin became one of EC's premiere colorists for its war comics and horror comics. She moved on to work for Atlas Comics briefly before returning to the financial sector in the late 50s.

However, just a few years later, Severin returned to comic books taking over as the regular artist of Marvel's Doctor Strange feature in Strange Tales, co-creating the Living Tribunal in her time on the feature. Severin continued working as Marvel's primary colorist until the 70s, when she shifted to penciling more interior pages for stories on titles such as Iron Man, Conan the Barbarian, Kull the Conqueror, and Not Brand Ecchh!.

Severin co-created Marvel's Spider-Woman in the 70s, designing her original costume. She continued to work for Marvel through the 80s, moving into the publisher's non-comics Special Projects Division where she created licensing art and art for Marvel merchandise.

Severin continued to work in comic books until her retirement in 2002. In her career, she was honored with the 1974 Shazam Award for Best Penciller (Humor Division) and a 1988 Inkpot Award, as well as Comic-Con International's Icon Award in 2017. In 2001, she was inducted into the Will Eisner Hall of Fame.
Posted By nwcomicgames at 7:55 AM