The program Newsminute America broadcasts a report from Cape Citadel where a rocket with a top secret payload is about to be launched. The event provides a backdrop to telejournalist Paula Reinman’s examination of the perceived threat of mutants. The progam is being viewed by Kurt 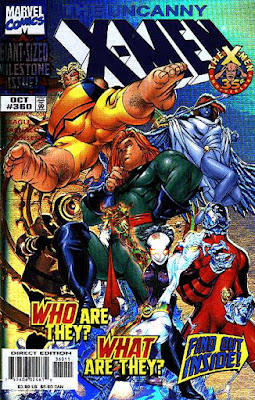 Wagner (Nightcrawler) as he and his fellow X-Men Kitty Pryde (Shadowcat) and Piotr Rasputin (Colossus) travel via ocean liner from England to New York.

Traveling around the world, an individual who appears to be Professor Charles Xavier approaches several super-powered mutants, inviting them to become his new team of X-Men. He gathers Addison Falk (the Grey King), a telepathic genius, Dan Dash (Chaos), an autistic reality-warper, a metallic shapeshifting mercenary codenamed Mercury, Cristal Lemiuex (Crux), a young girl with powers over fire and ice, and Lee Broder (Landslide), a crude bruiser.

Aboard the liner Titania, Kurt activates his image inducer to appear normal and joins Kitty an Piotr on the sun deck. Without warning, the new team of mutants invades the ship, causing major damage and endangering lives. Nightcrawler, Shadowcat and Colossus, shocked and angered when the assailants call themselves the X-Men, go into action to protect the ship and its passengers.

While Nightcrawler saves children and crewmembers, and Colossus repairs a brwach in the hull, the Grey King uses his power dampening ability to make Shadowcat, to whom they refer as “the savior”, tangible. Landslide grabs her in a bear hug and Chaos teleports them elsewhere.

Meanwhile, in the sewers beneath the Pentagon in Washington, DC, the true X-Men (Storm, Wolverine, Rogue and Marrow) are covertly making their way to a rendezvous with their scientist ally at NASA, Dr. Peter Corbeau. They sneak toward Corbeau’s office through the ventilation system. Just outside the scientist’s office, they overhear Pentagon officials investingating Corbeau’s disappearance as they’re gathered around a gaping hole in the floor. A fragment of a recording indicates he was abducted by the X-Men, news which puzzles the hidden mutants.

Sixty miles from Cape Citadel, Shadowcat is held captive within an abandoned government facility the bogus X-Men are using as a base. To her surprise, the mutants exhibit an extensive knowledge about the X-Men, which they explain they learned from “the Founder”. The man they refer to arrives, and Shadowcat sees it is Professor Charles Xavier.

At the Lincoln Memorial, ostensibly closed for cleaning, government liason Valerie Cooper meets covertly with the X-Men, responding to their summons. She tells them that until he recently transferred himself off the project, Dr. Corbeau was heading the “Benassi Rocket” program. Evidently, he intended to warn the X-Men its payload had something to do with mutants. Before she leaves, Cooper provides the heroes with a cell phone, a portable TV to monitor the launch reports, and the promise of transport to Florida.

Having finally reached New York, Kurt and Piotr arrived at their former home, the Xavier Institute for Higher Learning. They find the mansion deserted, except for Cecelia Reyes who confronts the pair.

At the Florida base, Kitty is thrilled to be reunited with the Professor, but her doubts remain as she doesn’t trust these new X-Men, not to mention she finds Xavier’s demeanor cold and distant. As he leads her through the complex, they pass by chambers Xavier explains are for storing mutants who are “no longer viable”. He further shocks Kitty by stating he is dying, and she agrees to help however she can.

At the mansion, Cecelia recognizes Kurt and Piotr as former X-Men and lowers her guard. She tells them the team is on a mission to Cape Citadel. In answer to Kurt’s question as to how they can aid the X-Men, she leads them to the hangar where Hank McCoy has been trying to restore the team’s original aircraft, the Blackbird.

As Storm, Wolverine, Rogue and Marrow speed toward Florida in their borrowed jet, the televised coverage of the launch, and the protests against it, continues with a press conference by a NASA director. As he is about to announce the nature of the secret payload, he falls to an assassination attempt. But behind the scenes, launch officials discuss the event, revealing the act was faked in order to divert the public’s attention from the launch.

Within the Founder’s base, Kitty works to repair computer code under the direction of Professor X. Finding an odd familiarity to the code, she locates and shuts down a computer virus. Immediately, the “Professor” states he is “whole again”, puzzling Kitty. Feeling her purpose has been fulfilled, he orders his ersatz X-Men to place her into one of the storage units. But then he senses the approach of the true X-Men and instead dispatches his team to face them.

Chaos generates massive turbulence which tears the jet apart. The two teams clash in freefall, just as the Blackbird zips by. Nightcrawler brings the craft around to catch Storm and Rogue, but then they’re immediately intercepted by a jet piloted by Mercury, who shoots them down.

Posted By nwcomicgames at 7:32 AM