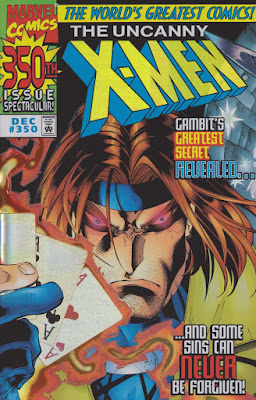 Gambit's greatest secret is revealed! And some sins can never be forgiven...

Spat and Grovel take the captive Gambit to a fortress in Antarica as he recalls the assignment given to him years ago by Mr. Sinister. Rogue, Beast, Joseph and Trish Tilby assemble a rickety vehicle to

In New York City, Psylocke is determined to investigate Maggott’s darkness and shadow-teleports him, herself and Archangel away.

In the Antarctic, as their vehicle dies, Joseph painfully senses something or someone, and raises the huge fortress from below the ice. They enter, finding various symbols of justice. Strangely, Psylocke, Archangel and Maggot emerge in the same Antarctic fortress, albeit in separate areas. Maggott meets Joseph, who is attacked and defeated by an unseen foe. Maggott seems to know the attacker and as part of an old debt he agrees to play along. One by one, the rest of the X-Men are subdued, it is finally revealed, by Erik the Red.

Meanwhile, over Pennsylvania, the other half of the X-Men team are flying home from Bastion's New Mexico base. Phoenix is using her telekinesis to keep the bomb implanted in Cyclops' body from exploding.

In the Antarctic fortress, the X-Men are chained in a jury box, with Archangel forced to play defender as Gambit is put on trial by Erik the Red. Erik presents testimony that before joining the X-Men, Gambit had performed two jobs for Sinister, assembling the Marauders and then guiding them into the Morlock tunnels, leading to the Mutant Massacre. Gambit's teammates express utter shock and Archangel, whose wings were mutilated in the Massacre, is outraged.

Erik forces Rogue to steal Remy's remaining memories of the event: Remy watched in horror, then rescued a Morlock girl named Sarah (who would become Marrow).

With Rogue now wielding Gambit's powers, she frees the X-Men. They try to fight Erik, but he causes the building to collapse and escapes. Rogue drags Gambit out of the fortress in time, but then abandons him in the Antarctic, while Psylocke teleports the X-Men to New York.

Safely aboard his transport, Erik sheds his armor is exchange for true uniform: that of Magneto.
follow them.
Posted By nwcomicgames at 7:38 AM