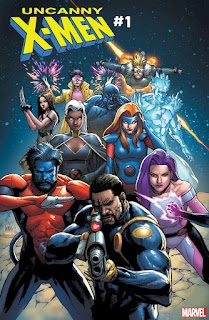 shown in last week's teaser image could be included in the story, along with characters not seen there as well.

"We are making Uncanny as huge as we can," co-writer Matthew Rosenberg told Marvel.com. "We're approaching it [as if] this might very well be the last X-Men story ever, so let's make it matter. We're doing all hands on deck, fate of the world stuff. It's big and scary.

"I think the best X-Men stories need two things that often seem in opposition, but are entirely crucial. First they need real danger. The X-Men go through more pain, hardships, and suffering than any other superheroes," he continued. "That's their lot in life. And they always come out the other side, but that should be tested every time. And the second thing a great X-Men story needs is creators who love the X-Men. It's easy to hurt and kill characters. It's easy to blow things up with no thought. When it matters, when the audience cares, is when there is real pain and heartbreak behind it. When the storytellers were as upset doing it as you are reading it, that's when an X-Men story works. And I'd put [co-writers Kelly Thompson and Ed Brisson], and my love of X-Men against almost anyone in the world.

Posted By nwcomicgames at 9:00 AM