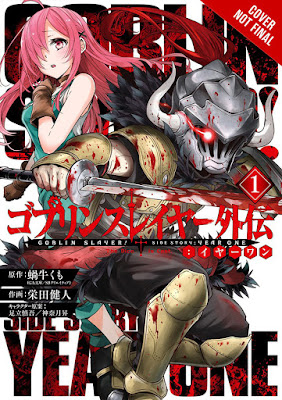 Goblin Slayer Side Story: Year One, Vol. 1
Written by Kumo Kagyu
Art by Kento Sakaeda
Three days after his sister's death, he finally regained the will to move. In the aftermath of a goblin raid, a lone boy mourns the loss of his village, his family...
Five years later, that same boy visits a city on the frontier and becomes an adventurer.
Despite being the lowest rank and wholly inexperienced, the young adventurer immediately accepts a quest and sets out alone to raid a goblin lair. His mind already burning with a clear vision of his calling, the legend of Goblin Slayer begins!
On Sale Date: December 11, 2018, Ship Date: November 14, 2018
9781975329280, 1975329287
Paperback
$13.00 USD, $17.00 CAD
Comics & Graphic Novels / Manga / Fantasy
Ages 18 And Up, Grades 13 to 17
192 pages
Posted By nwcomicgames at 3:00 PM