The X-Men are lost in space!

After the cockpit of their starship plummeted through a damaged stargate, Beast, Gambit, Rogue, 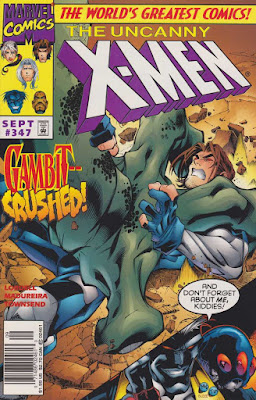 Joseph and Trish Tilby find themselvesseparated and scattered about what appears to be an alien landscape. Gambit is captured by bounty hunters Spat and Grovel (a giant reptile), whom he had betrayed in Madagascar in the past.

In the sewers beneath Manhattan, Callisto recuperates from her wounds and encourages Marrow to aid the X-Men.

Joseph and Rogue determine their environment is illusory, and Joseph's power overwhelms the illusion created by Spat and Grovel's ally Landscape. The actual locale is a cavern somewhat familiar to Joseph.

In Pine Bluff, South Carolina, Maggott is still tracking Joseph, and has a run-in with some rednecks, who are frightened off by his truck-eating slugs.

Eventually, Spat, Grovel and Gambit cross paths with Joseph, Rogue and Landscape, then all are confronted by Magneto's Nanny robot (thought to have been destroyed in the Antarctic base of Magneto).

Posted By nwcomicgames at 7:26 AM