Weekend Headlines - X-Force Is Back!

This December, writer Ed Brisson and artists Dylan Burnett and Pepe Laraz will launch a new X-Force series which reunites the core members of the original team - with the younger Cable that has debuted in Extermination.

In the story, the newly reformed X-Force will struggle with the loss of their mentor and the 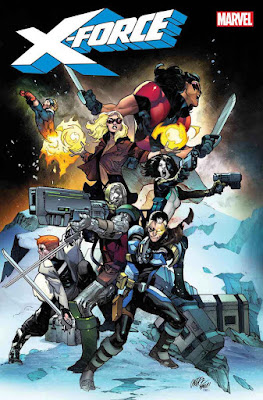 ramifications of the younger Cable's presence in the Marvel Universe. The line-up for the teen, as seen on the first cover, includes Kid Cable, Warpath, Domino, Cannonball, Boom Boom, Shatterstar, and Deathlok (who spent time briefly on X-Force before staying at the Jean Grey School).

“Coming out of Extermination, Domino, Shatterstar, Cannonball, and Warpath are reeling from the loss of their mentor and have unanswered questions,” Brisson told Marvel.com.

“They're on the hunt for this new Kid Cable to get those answers—some want his head, some just want to talk to him to find out what the hell is going on. Is this really their Cable? Is this an impostor?”

“X-Force has always been the one X-team that stood out the most for me,” added Burnett. “A lot of my favorite mutants have belonged to it over the years (namely Cable and Psylocke) but being able to bring back the original lineup in a new way is a huge honor. They're just a bunch of badasses. It's dope. I'm stoked.”

X-Force #1 is due out December 26. Here's the cover and full solicitation text.

X-FORCE #1
Written by ED BRISSON
Art by DYLAN BURNETT
Cover by PEPE LARRAZ
On Sale 12/26/18
Posted By nwcomicgames at 8:54 AM