What Did We Miss? - Hellboy: The Wild Hunt TPB

From time to time we miss things and it just happens. Today and moving forward, we're bring a new segment to the website titled "What Did We Miss?" and it's to highlight things in comics and whatever else sounds good. 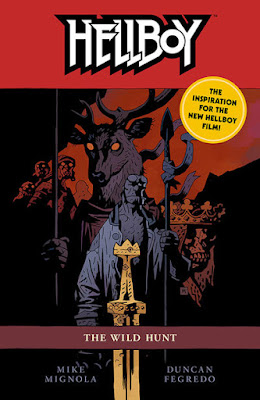 Hellboy: The Wild Hunt TPB (Second Edition) $14.99 Dark Horse Comics
Serving as the inspiration for the new feature film, Hellboy is called to England to take part in an ancient ritual of hunting giants, but quickly faces a much more dangerous enemy: Nimue, the Queen of Blood, who has risen with plans to create a monstrous army.

Lauded as ''one of the greatest sagas of the modern comic book industry'' (IGN), Hellboy's story has spanned 20+ years and led to multiple spin-off titles, prose books, and films.

* The story that inspired the upcoming Hellboy movie!
Posted By nwcomicgames at 9:11 AM