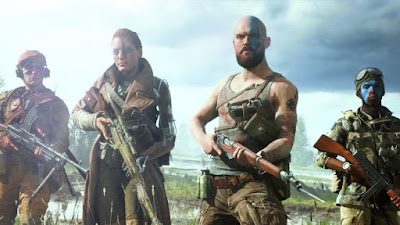 
Battlefield 5 is taking the series back to its World War 2 roots, with infantry, tanks, and aircraft aplenty locked in combat across massive multiplayer skirmishes. Choose your preferred class between Assault, Medic, Recon, and Support, then master your role to turn the tide of battle one spawn location at a time. Veterans should be aware of a few key tweaks this time around: now any class can revive downed allies, so no more ignoring cries for help when you're getting your snipe on.

The classic spotting mechanic now highlights general areas rather than individuals, encouraging you to seek out enemies yourself without immediately flagging a target for death. And there's a strong focus on Squad play in Battlefield 5, which rewards you for sticking with a designated group of men and women (including your very own customizable soldier).

As in Battlefield 1, War Stories provide some single-player action, while the multiplayer does away with the traditional Season Pass in favor of Tides of War, a system modelled around Fortnite's Battle Pass featuring limited-time events.
Posted By nwcomicgames at 6:59 AM