Tuesday's Headlines - What Did We Miss? 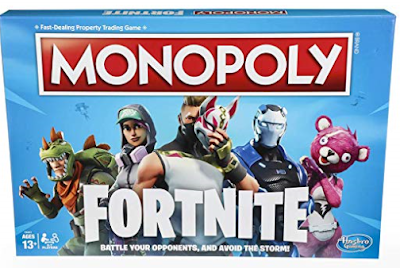 Monopoly: Fortnite Edition Board Game Inspired by Fortnite Video Game Ages 13 and Up $27.00
Fortnite fans, this edition of the Monopoly game is inspired by the popular Fortnite video game! It’s not about what players own; it’s about how long they can survive.

In the Monopoly: Fortnite Edition board game, 2 to 7 players claim locations, battle their opponents, and avoid the Storm to survive; the last player standing wins.

The Monopoly: Fortnite Edition board game features well-known locations as properties, and players aim to earn Health Point chips instead of Monopoly money to stay in the game.

Use loot chest items and the action die to battle opponents in this fun board game for Monopoly fans and Fortnite fans, ages 13 and up.

The game comes with 27 Fortnite outfits with pawn stands, and players can choose to play as their favorite.
Posted By nwcomicgames at 7:04 AM