A new poster for Once Upon a Deadpool has been released, featuring Fred Savage seemingly reprising his role from the 1980s cult classic The Princess Bride. 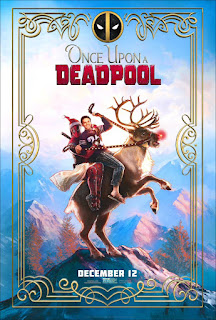 Once Upon a Deadpool is a recut PG-13 version of Deadpool 2 featuring 15 minutes of new footage.

Previous social media posts have implied Savage has been added to homage the framing sequence from the sarcastically whimsical family movie The Princess Bride in which a young boy, played by Fred Savage, gets a bedtime story from his grandfather.

In this new poster, Savage is again wearing an outfit almost identical to his clothes in The Princess Bride.

Once Upon a Deadpool is due out in theaters December 12.

Posted By nwcomicgames at 9:22 AM