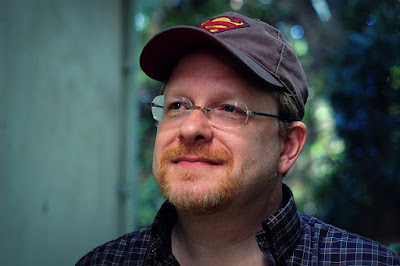 Waid is accused of defamation by the man behind Diversity & Comics. Comics writer and editor Mark Waid (Kingdom Come, Daredevil, 52) has launched a GoFundMe campaign (see last post to help, if you like) to cover legal costs as he responds to a lawsuit from Richard C. Meyer.

Meyer, who runs the Twitter and Youtube accounts “Diversity & Comics,” is considered one of the pre-eminent voices of the Comicsgate movement, which claims that the inclusion of “politics” in modern comics stories — and increased diversity of race, gender, sexual orientation, and gender identity among the people who make comics and the characters who appear in them — have decreased sales, threatening the existence of the American comics industry. Through the years, Meyer has gained a notorious reputation for making numerous racist and transphobic statements in regards to comics creators on his YouTube channel, towards industry figures like Ta-Nehisi Coates (Black Panther, Captain America) and Magdalene Visaggio (Eternity Girl).

Meyer claims that Waid threatened the small comics publisher Antarctic Press until it was “frightened for its very survival,” causing the company to drop Meyer’s Jawbreakers series in May of 2018, before its first issue could be printed. Meyer subsequently formed his own comic publishing company to publish the book, but is pursuing recompense for setbacks in his career that he claims are the direct result of Waid’s actions in May.
So what do we know?

On Sept. 19, about four months after the public battle, Meyer filed a civil suit against Waid. In addition to accusing Waid of intimidating Antarctic Press into dropping Jawbreakers, Meyer’s suit claims that Waid defamed him by characterizing him as a “racist, serial harasser of minorities, and as affiliated with white supremacists,” which has damaged his career.

Meyer’s suit claims that Waid’s actions have directly led to him being “blackballed by the comic book industry,” preventing him from tabling at conventions, appearing on panels and from being able to “find a U.S.-based artist for his next book.” Meyer’s suit says he has contracted an artist from the Philippines for the work. He demands a jury trial and damages in excess of $75,000.

Waid’s GoFundMe is set at a goal of $75,000, and has received $34,215 in pledges at the time of this writing, including donations from comics luminaries like Neil Gaiman, Dean Haspiel and Jim Zub.

“Mr. Meyer alleges that I deliberately and singlehandedly blocked the publication of one of his comic books,” Waid wrote in a statement on his website. “I did no such thing, and I believe this lawsuit is his effort to try and intimidate and silence those of us who stand up publicly against bigotry and racism and who continue to defend diverse creators from harassment [...] Even though I am confident that Mr. Meyer’s claims are entirely meritless, lawsuits are expensive and time-consuming. If I were wealthy, a lawsuit wouldn’t be much of an issue, but I work, y’know, IN COMICS. My expenses are already substantial and could easily run into six figures.”

Waid is being represented by Mark S. Zaid, a cofounder of the non-profit law firm Whistleblower Aid who has numerous ties to the American comics industry.

In his statement, Waid frames his defense against Meyer’s lawsuit as an act of standing up for others, not just himself; he acknowledges Comicsgate-related attacks on women, queer and trans folks and people of color who work in the comics industry.

“It isn’t just about me;” his statement concluded, “if we don’t fight online harassment, it only becomes nastier and more powerful.”
Posted By nwcomicgames at 2:22 PM