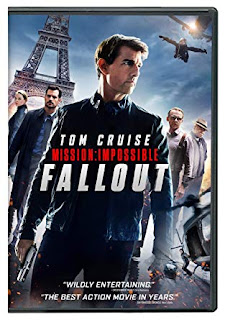 Mission Impossible: Fallout (2018)
Language: English
Genre: Action/Thriller
MPAA rating: PG-13
Director: Christopher McQuarrie
Actors: Tom Cruise, Rebecca Ferguson, Vanessa Kirby
Plot: Ethan Hunt and his IMF team once again find themselves racing against the clock after a botched mission puts all their lives, as well as the fate of the world, in danger. 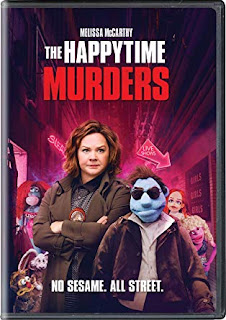 The Happytime Murders (2018)
Language: English
Genre: Comedy/Crime
MPAA rating: R
Director: Brian Henson
Actors: Elizabeth Banks, Melissa McCarthy, Maya Rudolph
Plot: In this world, puppets are people too - though treated as second-class citizens. During its height of popularity, The Happytime Gang delighted children of all ages. But the 80s are over and now a serial killer stalks the puppet cast, one gristly murder after another. Phil, a puppet and disgraced detective turned-private eye is on the case following the murder of his brother and hooks up with a former partner to try to solve the case. But as evidence mounts against him, he realizes he will not only have to solve the cast, but clear his name in the process.
Posted By nwcomicgames at 7:13 AM