Marvel Comics' oversized $7.99 relaunch of the iconic Uncanny X-Men was the bestselling comic book of November 2018 in the Direct Market, but a double-digit down month for comic book sales and a steep decline for graphic novels sales has put 2018 teetering on the edge of growing or declining versus last year, according to figures released by Diamond Comic Distributors last Friday morning.

DC had four titles of the Top 10, led by Grant Morrison and Liam Sharp's The Green Lantern relaunch, the second best-selling title of the month. Image Comics' The Walking Dead #185, ranked #18, was the bestselling non-Marvel or DC title. 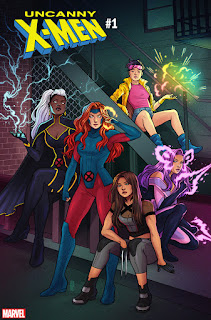 Comichron's John Jackson Miller has more on the month's biggest takeaways in his November sales summation:

"The year in the Direct Market’s going to wind up closer than an election in Florida. The November dip was expected because of the shorter shipping month- but what was surprising was how much less material publishers shipped to market. Marvel’s smallest new comics slate since October 2015. DC shipped 67 comics, down from 95 last November. Fully 22% fewer new comics out. The bright side is that even with so much less material out, Marvel was still up slightly year-over-year versus last November.

"The graphic novel category was worse off - there, the dynamic also looks supply-side, as publishers appear to be increasingly trying to get retailers to stock for the holidays in October.

"Six percent fewer comics have come out in 2018 so far; unit sales are down 6%. Pretty direct connection there. Since comics dollar sales are slightly up — and 2017’s unit sales were inflated by over ships and 25¢ books — the comics that did come out did a little better relative, per issue, than last year.