Dynamite Entertainment's Rainbow Brite ongoing is set to end February 27, 2019 with issue #5.
This ongoing was announced in July, with the first issue debuting October 3. Earlier this year, series writer Jeremy Whitley said that he had plans for the series beyond five issues. 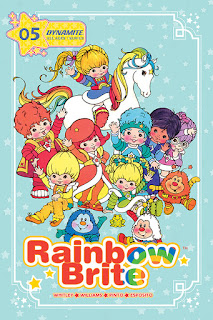 RAINBOW BRITE #5
Price: $3.99
Rating: All Ages
Cover A: Paulina Ganucheau
Cover B: “Classic” Cover
Writer: Jeremy Whitley
Art: Brittney Williams
Genre: All-Ages Adventure, Media Tie-In
Page Count: 32 Pages
ON SALE DATE: February 27
FINAL ISSUE
Wisp's adventure has taken her far from home and those that she loves the most, all in the name of helping her new friends and saving Rainbow Land. Find out if she is the magical Rainbow Brite they have been waiting for and if she can restore the color to this magical world, all while protecting hers!
Posted By nwcomicgames at 7:10 AM