Weekend Headlines | What DId We Miss? 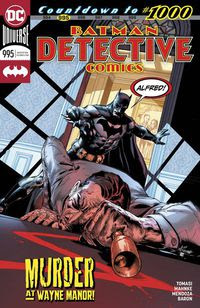 Detective Comics #995 $3.99 DC Comics
(Hot Issue) January 02, 2019
Alfred Pennyworth...attacked at the Wayne mansion! Who's hunting those closest to Batman? The monstrous shadow creature plaguing Gotham City gains the upper hand when two of the Dark Knight's most ardent allies fall prey to the violent vendetta. Will those tragedies send Batman over the edge? Good thing he's on his way to Arkham Asylum-but will he investigate a murder, or get incarcerated in a padded cell?
Posted By nwcomicgames at 11:03 AM