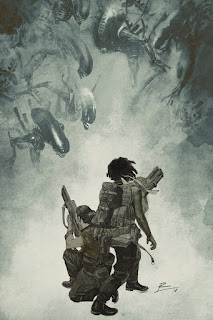 Amanda Ripley and Zula Hendricks are engaged in a desperate battle on the jungle moon, losing the fight against genetically modified Aliens and synthetics for survival. One desperate, last-ditch, option remains, and the two women are forced to decide how much of a sacrifice they are willing to make.

• Written by Brian Wood of Aliens: Defiance.
Posted By nwcomicgames at 7:02 AM