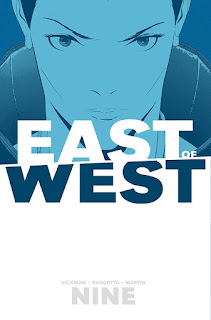 East of West, Vol. 9 TP
WRITER: Jonathan Hickman
ARTIST / COVER A: Nick Dragotta
APRIL 03 / 144 pages / FC/ T+ / $16.99
The penultimate trade collecting the fan-favorite story of love at the end of the world. Collects EAST OF WEST #39-42 HOLLYWOOD NEWS! Amazon Studios has put in development as an hour-long genre drama series from Jonathan Hickman and Nick Dragotta. They are teaming with Robert Kirkman who will executive produce via Skybound Entertainment’s first-look deal. The show will be created and executive produced by Hickman and Nick Dragotta and written by Hickman. Also executive producing alongside Skybound’s Kirkman will be Dave Alpert, Sean Furst, and Bryan Furst (Dice).
Posted By nwcomicgames at 6:20 AM