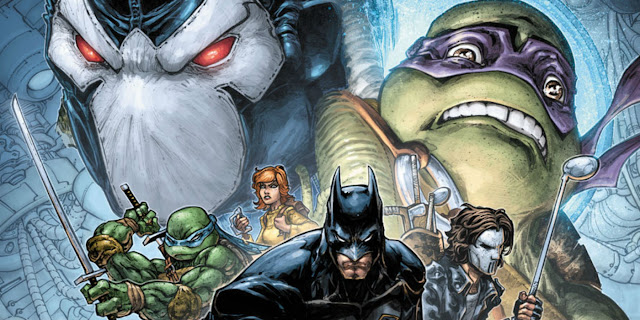 This is the best news I've heard this week as it was reported that James Tynion IV and Freddie Williams II's landmark 2015 crossover Batman/Teenage Mutant Ninja Turtles is being adapted as an animated film as part of a new partnership with DC and Nickelodeon. First reported by SYFY Wire, this cartoon feature is scheduled to be released on home video later this spring. The animation studio developing this film has not been disclosed.

IDW Publishing, who published the original 2015 Batman/Teenage Mutant Ninja Turtles comic book limited series, is not listed as being involved.

The cast includes frequent DC player Troy Baker, who will be voicing both Batman and the Joker in the film; while he has voiced both roles for seperate projects, this would be his first time doing both in the same project.

This wouldn't be the first cross-company crossover to be developed as a film - Dark Horse's 1989 Aliens vs. Predator limited series inspired several live action crossover films in the early 2000s.
Posted By nwcomicgames at 6:20 AM