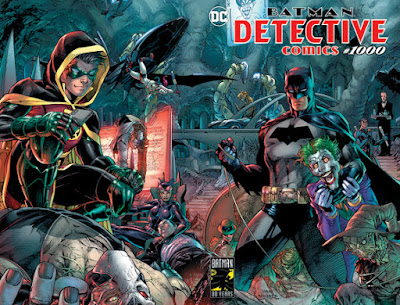 DC today unveiled full story details on the landmark 1,000th issue of DETECTIVE COMICS, debuting on March 27, 2019. The 96-page DETECTIVE COMICS #1000 celebrates the Dark Knight through a series of seven-to-nine-page standalone short stories from an all-star collection of the top writers and artists in Batman’s recent history including Tom King, Tony Daniel and Joëlle Jones, Scott Snyder and Greg Capullo, Peter J. Tomasi and Doug Mahnke, Brian Michael Bendis and Alex Maleev, Warren Ellis and Becky Cloonan and more. DC is making Bendis’ and Maleev’s new story “I Know” available to read today, in its entirety for free, on DCComics.com.

“Following in the footsteps of the blockbuster ACTION COMICS #1000, DETECTIVE COMICS #1000 is going to be a must-have for every kind of Batman fan,” said DC Publisher Dan DiDio. “Everyone we asked to be a part of this monumental issue immediately said yes and we can’t wait for fans to get their hands on the comic book.”


Here is just a preview of the lineup of stories, writers and artists to be featured in DETECTIVE COMICS #1000 is:

“Medieval,” by Peter J. Tomasi and Doug Mahnke
Appearing in DC’s comic book continuity for the very first time, a new and mysterious version of the Arkham Knight will be debuting in a story that looks at Batman’s encounters with his villains throughout his career through the Arkham Knight’s eyes—but the Knight’s scheme remains to be seen.

“Batman’s Longest Case,” by Scott Snyder and Greg Capullo
One of the most popular talent teams in the history of the Dark Knight delivers a tale in which Batman follows clues around the world, leading him back to his home in Gotham City and to a secret organization that has been keeping tabs on him for years.

“Manufacture for Use,” by Kevin Smith and Jim Lee
The fan-favorite director of Clerks and one of Batman’s most visionary artists present a story that cuts between Batman fighting his greatest villains and his attempts to track down the gun that killed his parents.
Posted By nwcomicgames at 5:26 PM