Pick of The Week | Punks Not Dead London Calling #1 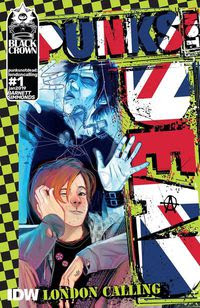 Teenage geek Fergie Ferguson and his BF Sid, the ghost of a punk rocker who only Fergie can see or hear, are on the lam for a murder they didn't exactly commit. They've made it to London but on their tail are the police, the quirky paranormal investigation agency the Department of Extra-Usual Affairs, and some really freaky magpie monsters, so there's not (much) time for sightseeing.

While Fergie tracks down his long-absent father to get answers about his powerful new 'abilities' (Sid calls them 'psychic grenades'), DfEUA's old-school mod super spy Dorothy Culpepper and her sensible young partner Asif Baig uncover evidence that links Fergie to the underworld. Fergie's mum Julie and his not-a-girlfriend Natalie also join forces to save Fergie from life in prison... but with a psychopathic serial killer showing an interest, everybody might soon be running out of time.
Posted By nwcomicgames at 6:20 AM