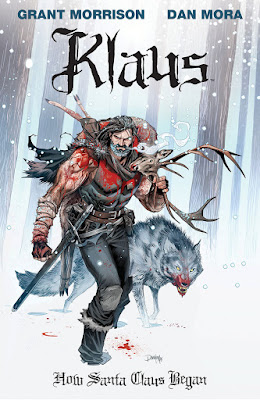 KLAUS: HOW SANTA CLAUS BEGAN VOL. 1 SC
*****ADVANCE SOLICITED FOR AUGUST 2019*****
Publisher : BOOM! Studios
Retail Price : $19.99
Writer: Grant Morrison
Artist: Dan Mora
Cover Artist: Dan Mora
Synopsis:
- He’s a myth. He’s a legend. He’s loved worldwide by children and adults alike...but does anyone truly know the origins of Santa Claus? Set in a dark fantastic past of myth and magic, Klaus tells the story of how Santa Claus really came to be—the tale of one man and his wolf against a totalitarian state and the ancient evil that sustains it.
- Award-winning author Grant Morrison ( All-Star Superman, Happy! ) and Eisner Award-nominated illustrator Dan Mora ( Buffy the Vampire Slayer, Go Go Power Rangers ) revamp, reinvent, and reimagine a classic superhero for the 21st century, drawing on Santa’s roots in Viking lore and Siberian shamanism, and
taking in the creepier side of Christmas with characters like the sinister Krampus.
- Klaus is “Santa Claus: Year One” and finally answers the burning question: what does Santa Claus do on the other 364 days a year?
- Collects issues #1-7
Posted By nwcomicgames at 6:26 AM