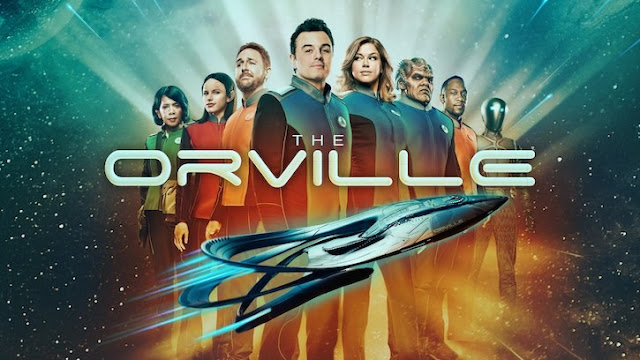 The Orville Executive Producer/writer David A. Goodman (Futurama, Star Trek: Enterprise), artist David Cabeza, and colorist Michael Atiyeh (Halo: Escalation, Tomb Raider) are teaming up to bring all the adventures from the crew of The Orville onto the printed page in The Orville Season 1.5: New Beginnings. These all new adventures will consist of two, two-issue “episodes” bridging the gap between the events of the first season of Seth MacFarlane’s hit television series, and the second season now airing on FOX.

The first of these “episodes” starts with The Orville #1: New Beginnings Part 1 (of two). On their way to a fleet conference, Ed and Gordon investigate a distress signal from a century-old buoy belonging to a Union ship. Back on the Orville, Kelly tries to mediate when Bortus insists on enrolling Topa into school despite him being only a few months old. 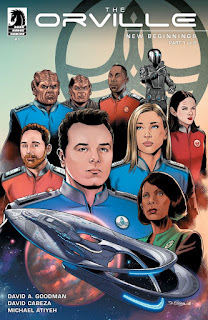 The second “episode” begins with The Orville #3: The Word of Avis Part 1 (of two) which sees the Orville intercept a small Union ship en route to the interstellar territory of the easily aggravated Krill. The passengers, originally thought to be a group of xenoanthropologists, turn out to be much, much more interesting and dangerous than the crew of the Orville could’ve imagined.

The Orville #1: New Beginnings Part 1 (of two) goes on sale July 17, 2019 and is available for pre-order at your local comic shop.


Set 400 years in the future, Seth MacFarlane’s hit space adventure series, THE ORVILLE follows The U.S.S. Orville, a mid-level exploratory spaceship. Its crew, both human and alien, face the wonders and dangers of outer space, while also dealing with the problems of everyday life.

In Season Two, the ship’s crew will meet never-before-seen aliens and face old adversaries, the Krill. They’ll make first contact with a new civilization and revisit the planet Moclus. ED (MacFarlane) and KELLY’s (Adrianne Palicki) relationship also will take a new turn – all of which points to a season filled with adventure, mystery, romance and, as always, some poignant social commentary.

THE ORVILLE is produced by 20th Century Fox Television. The series was created and written by Seth MacFarlane. MacFarlane, Brannon Braga, David A. Goodman, Jason Clark and Jon Cassar serve as executive producers on the series. Jon Favreau directed the series premiere episode.
Posted By nwcomicgames at 6:15 AM