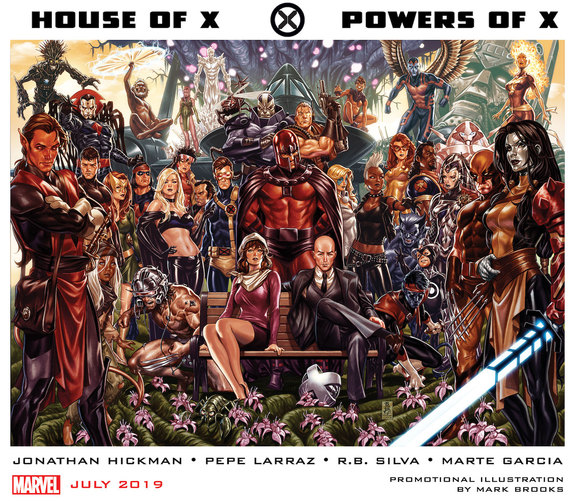 Writer Jonathan Hickman will launch two new X-Men titles starting in July, following the end of the current "Age of X-Man" story, as announced during the publisher's Next Big Thing panel at C2E2 2019.

The two titles are House of X and Powers of X, and will mark Hickman's first work for the publisher since the end of Secret Wars in 2016. Pepe Larraz will draw House of X while R.B. Silva will draw Powers of X. Marte Gracia will color both titles.

Oddly, in Powers of X the "X" is actually the Roman Numeral X, meaning 10 - similar to Wolverine's "Weapon X" designation. Further, in the promotional image seen above, the characters depicted "could be from the past, present, or future."

Marvel Editor-in-Chief C.B. Cebulski said that Hickman's X-Men would mark a new milestone for the team in the vein of Giant-Sized X-Men #1, Lee and Claremont's X-Men #1, Age of Apocalypse, and Grant Morrison's X-Men, calling the titles "something totally different" for the franchise.

“We are excited to have Jon back with the Marvel family, and we could not have asked for a better creative team to help usher the X-Men into a whole new era,” said Cebulski in an accompanying statement. “While we can’t reveal too much about the story just yet, these new stories will redefine the X-Men and their place in the Marvel Universe. This is a historic moment both new and passionate fans won’t want to miss.”

"Let me just say that we have radical, radical plans for all of you. I grew up primarily a DC Comics guy; the only book I read of Marvel growing up was the X-Men," said Hickman during the announcement. "All the books I've done at Marvel up to this point, those were fantastic jobs - but they were jobs. This is was the first book I've loved before I started doing."

"I probably haven't been more proud of anything I've worked on than this. I think all of you will be pretty jacked. We're doing some different radical stuff. Two books that'll you have to read both to stay tuned, but there's a good reason for it."

House of X and Powers of X will begin in July, and will publish on an alternating weekly schedule, effectively delivering a weekly dose of Hickman's X-Men.
Posted By nwcomicgames at 6:40 AM