Gamers are pretty freaking creative when they put their minds to it and one Nintendo fan decided to take their love for the company to a whole new level when they decided to transform their 64-inch flat screen into a giant -- and accurate -- Nintendo Switch platform.

According to superfan 'Suprman9', "I knew it would probably need to be free standing, and I thought it would be cool to have a shelf at the bottom under the screen. Unfortunately, I realized that a Game Boy Color would not work due to the shape of the screen. A Game Boy's screen is a square, where as most TVs (and the one I had) are very narrow rectangles. I thought it would look foolish to have such large black areas to fit the TV in a square screen." 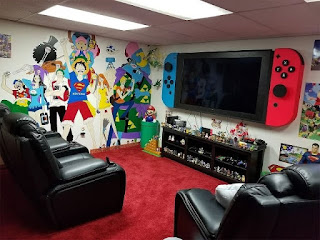 They mentioned that the 3DS design didn't really work right either, especially with the ability to be free standing. They even tampered with the idea of adding an additional screen to make that design work, but alas -- it just didn't quite mix well.

Then a struck of brilliance occurred: why not the Nintendo Switch? "The Switch was the perfect design because the center console looks like a miniature TV. Also, the Switch is the current console and has had some of my favorite games on it (Super Mario Odyssey & Breath of the Wild)."

You can follow the step-by-step process of how they made this vision a reality right here, but it was definitely a passion project that took more than a little maneuvering to make it work.
"I started with one piece, which looked like a large, very wide U shape. I then traced that 10 times on 10 different pieces of wood. I cut each piece out and then stacked them. From there, I glued and nailed them together. I used a belt sander along the sides to smooth out all of the pieces until they were even. Smoothing out the pieces made them look like one solid piece."

They added, "I then added two more pieces, however this time they were not hollow. These two pieces served as the front cover and the back panel. Finally, on the front covers, I used an edge router to round the edges of the door to match the curvature of the Joy-Cons. In the picture below, you can see all of the pieces stacked on top of each other."
Posted By nwcomicgames at 6:05 AM