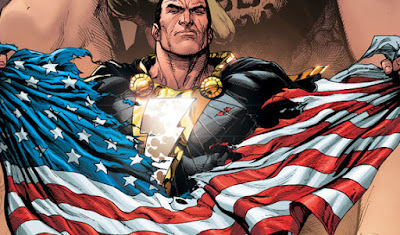 Upcoming issues of Geoff Johns and Gary Frank's Doomsday Clock have been rescheduled, with #10 estimated for a May 29 release and #11 for August 14.

For #10, this is one week later than DC announced last week - for a cumulative nine weeks past its originally-solicited March 27 release date. Doomsday Clock #11 was originally solicited to come out May 22, but this week DC has pushed it back 12 weeks.

When first launched, DC planned for Doomsday Clock to run monthly from November 2017 to December 2018, with March and August as planned skip-months. After #2 and #3 were rescheduled, Johns announced in January 2018 that series was going bi-monthly

"A huge huge thank you for your patience with Gary Frank and I. We're shifting Doomsday Clock to bi-monthly. I know how disappointing that is, truly. We are trying to do our best work with 32 pages an issue and going down to 20 pages a month was not an option for us," tweeted Johns in January 2018.

"We hope we'll go back to monthly at some point, but bi-monthly is guaranteed. We'd rather tell you when it's coming out than just be late. Again, thank you to the readers and retailers and apologies. I hope we're delivering a story that's worth your time, money & patience!"

Subsequent Doomsday Clock issues continued to be solicited and then rescheduled. Doomsday Clock #12 has not been solicited for release, however a hardcover collection of all 12 issues is listed on Amazon for a November 26, 2019 release.
Posted By nwcomicgames at 6:54 AM