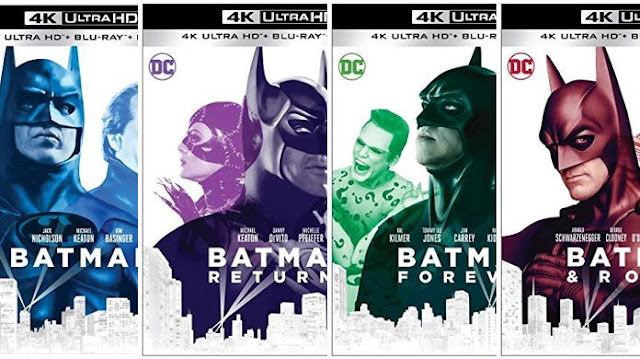 Earlier this month, Warner Bros. Home Entertainment and DC Comics announced that four classic Batman films would be released in 4K Ultra HD Blu-ray / digital to celebrate the 80th anniversary of the Caped Crusader's first appearance in Detective Comics #27 in 1939. These films include Tim Burton's Batman and Batman Returns as well as Joel Schumacher's Batman Forever and Batman & Robin.

At the time of writing the Batman, Batman Returns, and Batman & Robin 4K UHD editions are available to pre-order on Amazon with a 20% discount with shipping slated for June 4th. Batman Forever is still listed at full price, but this will change soon. Keep in mind that the titles are covered by Amazon's pre-order guarantee, so you won't be charged until they ship and you'll automatically score the biggest discount that occurs between the time that you order and the release date.

If history serves, these Blu-rays will likely top out at a discount of around 40% during the pre-order period, so you'll automatically be covered if and when that happens. Lock the deal down while you can.

If you are interested in owning the entire Batman collection in 4K, you might want to wait until September 17th when a box set of all four films will be available for purchase.

As far as special features are concerned, the Blu-rays will collectively include more than 17 hours of previously released extras, including full-length commentaries by director Tim Burton on Batman and Batman Returns and director Joel Schumacher on Batman Forever and Batman & Robin.

As you can see, the cover art has also been given a makeover "designed in stunning glossy retro colors reminiscent of the 1980’s and 1990’s era when the films were originally released in theaters". We're guessing that you will tolerate them or hate them.
Posted By nwcomicgames at 6:09 AM