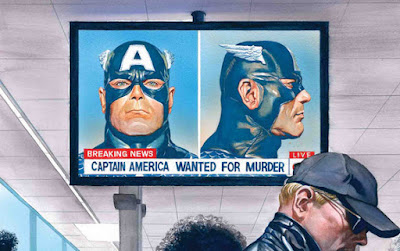 In comic book news.... Marvel's Captain America #10 through #12 have each been pushed back into the subsequent month, with the April issue in May, the May issue in June, and the June issue to July.

Issues #7 through #9 were also pushed back, with Captain America #9 currently estimated to come out April 3. Marvel has not given a reason for the series' delays.

CAPTAIN AMERICA #10
TA-NEHISI COATES (W) • Adam Kubert (A) • Cover by ALEX ROSS
ASGARDIAN VARIANT COVER BY NICK BRADSHAW
CAPTAIN OF NOTHING continues!
A prison riot is the best possible cover to break Captain America out of confinement — but what if the Star-Spangled Avenger doesn’t want to go?
32 PGS./Rated T+ …$3.99

CAPTAIN AMERICA #11
TA-NEHISI COATES (W) • Adam Kubert (A) • Cover by ALEX ROSS
MARVEL BATTLE LINES VARIANT COVER BY YOON LEE
CAPTAIN OF NOTHING continues! HUNTED AFTERMATH!
MANHUNT! But who is doing the hunting — the law-enforcement apparatus of the world or Captain America himself?
32 PGS./Rated T+ …$3.99

CAPTAIN AMERICA #12
TA-NEHISI COATES (W) • Adam Kubert (A) • Cover by ALEX ROSS
MARVELS 25TH TRIBUTE VARIANT COVER BY JULIAN TOTINO TEDESCO
MARVELS 25TH VARIANT COVER BY ALEX ROSS
“CAPTAIN OF NOTHING” CONCLUDES!
Captain America is a fugitive! So Captain America must disappear! But that doesn’t mean that Steve Rogers has to give up the fight to prove his innocence and bring the true murderer to justice! It’s time for Cap to try something new!
32 PGS./Rated T+ …$3.99
Posted By nwcomicgames at 6:07 AM