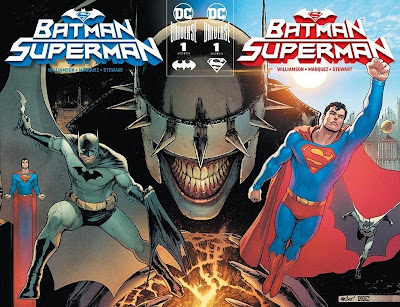 A new Batman/Superman ongoing is launching this August, to fight a new version of the Secret Six led by the Batman Who Laughs. First reported by Heat Vision, this new volume of Batman/Superman will be written by Joshua Williamson and drawn by former Marvel exclusive artist David Marquez.

"We discover, through the Batman Who Laughs series that the Batman Who Laughs have been working on this massive plan since Metal. What it is, he has sleeper agents throughout the [DC Universe]. They’ve been infected, and they’re slowly turning into the worst versions of themselves," said Williamson. "Some of them know they're changing, some don't. Some aren't aware it's kind of like a Jekyll and Hyde situation where they're not aware of [what] the other side is doing."

"This is happening to six people - we’ve been calling them the new Secret Six - who have been turned. But who could be turned? Who are they?" Williamson continued. "[Batman and Superman] have to go out and figure it out. But that means spying on other heroes, friends, allies. We talked about the end of the Thing, where it’s the two of them and they’re like, ‘It could be you, it could be me, but now we have to work together.’"

Marquez jumps to DC after five years at Marvel, which included drawing the Civil War II event. According to the artist, he originally planned on doing a creator-owned title, but DC's pitch for Batman/Superman swayed him to come to DC instead.

"I've been very fortunate that in a relatively short career I'd been able to work on some big projects," Marquez said. "When I heard the possibility of working with DC, I wasn't sure I wanted to do more work-for-hire stuff after wrapping up with Marvel. They really kind of had to sell me on the idea of doing the series."

Batman/Superman #1 is scheduled to be released in August.
Posted By nwcomicgames at 6:09 AM