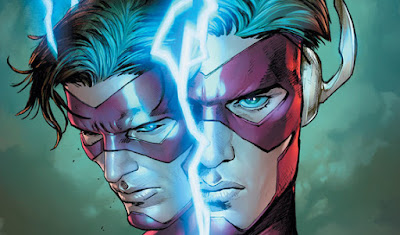 DC has rescheduled Heroes in Crisis #9 for a new, May 29 release date. While only pushing back the title one week, it does work to coincide the finale's release with an especially important issue of Doomsday Clock according to its solicitation.

May 29's Doomsday Clock #10 is solicited to reveal "the secrets behind Dr. Manhattan and his connection to the DC Universe." Remember, Wally West returned in May 2016's DC Universe: Rebirth one-shot, which set-up many of the events of Doomsday Clock. West went on to become a major character - the murderer, in fact - of the Heroes in Crisis event.

Here is the updated solicitation for Heroes in Crisis #9.

HEROES IN CRISIS #9
written by TOM KING
art and cover by CLAY MANN
variant cover by RYAN SOOK
The most-talked-about miniseries of the year reaches its stunning finale! The mystery behind the murders at Sanctuary is solved, but the mind behind it is one the heroes never expected. With their deepest secrets exposed, the Trinity has to consider how to carry on. Should the tragedy cause them to redouble their efforts to help their hurting comrades, or will they need to close up shop? The answers will be found in the ashes of this final showdown, and the fates of Booster Gold, Harley Quinn and the rest hang in the balance.
ON SALE 05.29.19
$3.99 US | 9 of 9 | 32 PAGES
FC | RATED T+
Posted By nwcomicgames at 6:10 AM