In case you missed this story!

Writer Jonathan Hickman, who takes over the X-Men franchise with July's House of X #1 and Powers of X #1, says that the "entire line" of X-Men comic books will be canceled to coincide with the launch of the two biweekly titles.

“I didn’t feel like just doing a new number one was enough. I also didn’t think that if we were serious about what we were trying to do we should have a mixed message in the market about what an 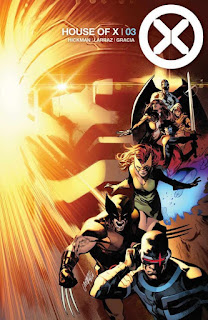 X-book is,” Hickman explained of the decision to ComicBook.

“So I argued for cancelling the entire line: Why it would work, why it was a good idea, and most importantly, why it was what we needed to do narratively to return the X-Men to their rightful prominent position in the Marvel Universe.”

“We needed to sell the idea that this is what we’re going to be doing for the next few years. So if you want to read X-Men books during the run from late-July through September, House of X and Powers of X are the only new X-books available and everything that’s going to follow is based on them,” he continued. “We wanted to be clear to the fans, to the stores, and just as importantly, to the creators who are going to be staffing these books in the future. We wanted the message to be very clear: This is a whole new era for the X-Men. This is what we’re doing now. And so, POX and HOX is how we’re starting. It’s a solid plan, I think.”

House of X and Powers of X (to be read "Powers of Ten," like the Roman numeral) will run for 6 issues each over three months, with each title publishing on an alternating weekly schedule.

Following that, Hickman says Marvel plans to relaunch the X-Men line, with some "traditional" titles, and some new ideas - including a new core flagship X-title which Hickman will write. What's more, it's all part of a multi-year, multi-wave plan to revamp the X-Men. More information will be 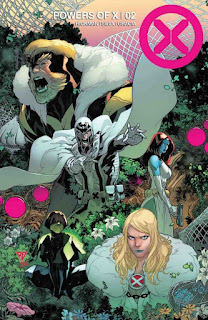 “At the conclusion of our 12 weeks of HOX and POX, we'll be launching an entire new universe of X-books,” Hickman revealed. “Some will be traditional fare, some carry through on ideas presented in HOX and POX. Some books are completely new concepts. I, personally, will be writing the ongoing flagship X-book.”

“Now, we're already in production on all of these 'Wave 1' books and our plan at this moment is to introduce the titles, creative teams, and publishing details around SDCC, which is a week before HOX #1 goes on sale. We also just finished our plans for our 'Wave 2' books that will debut in 2020 and we're getting ready to hire talent for those.”

“It's pretty exciting, and this kind of long-term planning is one of the benefits of knowing what direction you're headed for the next few years.”