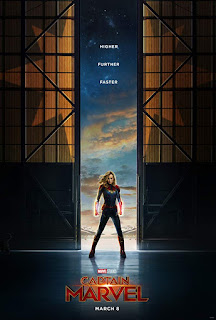 Captain Marvel (2019)
Theatrical Release Date: 03/08/2019
Language: English
Genre: Action/Fantasy
MPAA Rating: PG-13
Director: Anna Boden, Ryan Fleck
Actors: Brie Larson, Samuel L. Jackson, Lee Pace, Gemma Chan, Annette Bening, Ben Mendelsohn
Plot: Air Force pilot Carol Danvers finds herself transformed into an incredibly powerful individual after an accident, rescued by an alien race, the Kree and imbued with their own power. Joining the elite warrior team, the Starforce, led by commander Mar-Vell, she returns to Earth when she finds out her home planet is in the middle of a war between the Kree and the shape-shifting Skrulls. Beyond fighting this war, she hopes to learn more about her past and she catches the attention of Nick Fury, a bureaucrat who will one day go on to become the director of S.H.I.E.L.D.
Posted By nwcomicgames at 5:44 AM