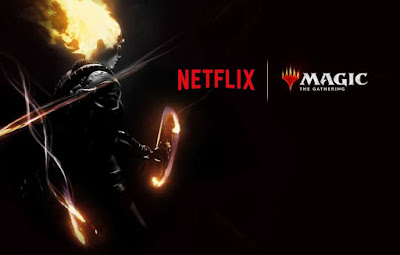 It looks like the Russo Brothers have found their next passion project outside of the Marvel Cinematic Universe. On the tail end of Avengers: Endgame, the director duo has signed on to a new series, and it is an anime focused on all things Magic The Gathering.

Yes, that’s right. Netflix and Wizards of the Coast are doing an anime series based on the card game, and the Russo Brothers are jumping on board the project.

“HUGE ANNOUNCEMENT TIME: Netflix and Wizards of the Coast are teaming up with Joe and Anthony Russo to make a Magic: The Gathering anime series and this teaser of Chandra has me asking QUESTIONS,” Netflix tweeted earlier today.

According to new details about the series, Anthony and Joe Russo will executive produce the series. In a newly released statement, the pair shared how excited they are to work on the series and confirmed they are lifelong fans of Magic The Gathering as well.

“We have been huge fans and players of Magic: The Gathering for as long as it has been around, so being able to help bring these stories to life through animation is a true passion project for us,” the duo said.

So far, there are few details out about the project, but it will focus on the expansive world of Magic The Gathering and its Planeswalker, which are described as “Magic’s unique magic-wielding heroes and villains as they contend with stakes larger than any one world can hold.”
Posted By nwcomicgames at 6:22 AM