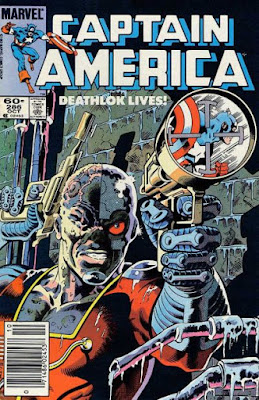 Captain America #286 Oct. 1983
Godwulf sends Luther Manning from the dystopian future of 1991 to the past so he can find the lost Deathlok. Unaccustomed to a populated city. Manning inadvertently draws attention to himself, but manages to evade the police. Meanwhile Steve Rogers meets with Bernie and they head to her parents' house to have dinner, but en route Bernie almost runs over Manning, who's making his way to an abandoned Brand facility, and to Bernie's frustration, Steve leaves to investigate. Cap catches up with Manning, who explains his mission. Breaking into the facility they find it fully operational and staffed by Roxxon agents, who they battle until Deathlok appears, and shoots Manning through the chest.
Posted By nwcomicgames at 6:31 AM